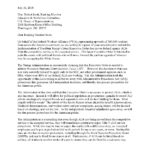 On July 16 the Federal Workers Alliance (FWA), of which the Metal Trades Department is a member, sent a letter in support of Representative Scott’s amendment to defund the implementation of President Trump’s latest Executive Order that moves federal agency ALJs from the competitive service to the excepted service.

The FWA thanked Rep. Scott for his amendment and urged the Rules Committee to make it in order, and all House members to support it.

See the text of the full letter below:

On behalf of the Federal Workers Alliance (FWA), representing upwards of 300,000 workers from across the federal government, we are writing in support of your amendment to defund the implementation of President Trump’s latest Executive Order that moves federal agency ALJs from the competitive service to the excepted service. This latest Executive Order is intended to pack the courts with political friends who will move forward the partisan agenda of whoever may be occupying the White House.

The Trump Administration is inaccurately claiming that this Executive Order is needed to address the recent Supreme Court decision, Lucia v SEC. However, the decision in that case was very narrowly tailored to apply only to the SEC, not other government agencies such as SSA, where over 80% of our federal ALJs are working. Yet, the Administration took the opportunity of the Lucia ruling to all but do away with Administrative Procedures Act (APA) protections that guarantee ALJ independent decisions, and thereby due process protections for the American public.
The Administration has also said that this Executive Order is necessary to protect ALJs, which is also incorrect. Instead it will allow for political appointees at government agencies to award ALJ jobs to ideologically aligned friends and supporters who will do their bidding for them. What exactly will this mean? The rebirth of the Spoils System where disability benefit determinations, Medicaid determinations, and worker safety and pay complaints, among others, will be decided based on ideology, and not the law. As the independent, impartial adjudicator goes away, so will the due process protections for the American public.

The Administration is contending that even though ALJs are being moved from the competitive service to the excepted service, they will nonetheless continue to enjoy Title V civil service protections. While this may be true on paper, the reality tells a difference story, as ‘excepted’ employees can be put on probation/trial work periods for up to two years, or more. During this time an ALJ has no worker protections, including through the Merit Systems Protection Board
(MSPB), and can be fired for no reason at all. Furthermore, if ALJs can be hired based on politics, all it takes is another stroke of a pen to ensure they can be fired the exact same way.

By providing a path around Title V protections, political hires will take precedent over competitive hires and consequently, when caseload declines, subject the “competitive” ALJs to a Reduction in Force (RIF). The Administration made clear in its May 25th anti-labor EO’s that the concept of seniority will no longer apply in any collective bargaining agreement, so a RIF can be used to pick and choose the ALJs the agency wants to remove. Who will be first: Union Officials? Judges who award benefits too often? Judges who do their jobs with integrity and won’t be cowed by abusive and unethical management directives?

Lastly, the Administration is contending that the EO will only apply to newly hired ALJs. Here again, that is misleading and inaccurate, as James Sherk, special assistant to the president for domestic policy, was quoted in a July 10th Government Executive article saying that, “agency heads can ratify existing judges under the new rules…”.

Make no mistake about it, this Executive Order opens the doors wide for a total politicization of the adjudicatory process. Regardless of political party or ideology, lawmakers across the political spectrum should be alarmed at the impact that this Executive Order will have on the due process protections for the American public.

FWA thanks you for your amendment and urges the Rules Committee to make it in order, and all House members to support it. If you or your staff have any questions, please contact FWA Legislative Chair Matt Biggs at (202) 239-4880.