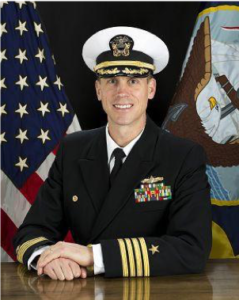 Rear Admiral Scott Brown is a second-generation naval officer who joined the Navy through the Nuclear Propulsion Officer Candidate Program. He is a 1991 graduate of Rensselaer Polytechnic Institute where he achieved a Bachelor of Science degree in Engineering Physics. He also holds a Master of Business Administration (MBA) degree from the University at Albany, and a Master of Science degree in Nuclear Engineering and an Engineer Degree in Nuclear Engineering, both from Massachusetts Institute of Technology.

He served as a nuclear-trained surface warfare officer for seven years with tours as Machinery Division Officer and Chemistry and Radiological Controls Assistant onboard USS Theodore Roosevelt (CVN 71), and as Plant Evaluation Officer at Naval Nuclear Power Training Unit, Ballston Spa where he supervised propulsion plant operational performance and maintenance.