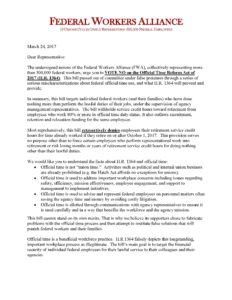 The Federal Workers Alliance (FWA), coalition of labor unions representing more than 300,000 federal workers sent sent a letter to Congress this week urging Representatives to vote no on the Official Time Reform Act of 2017 (HR1364). In all, 16 unions signed on to the letter.

The legislation aimed to withhold service credit hours towards retirement from employees who work 80 percent or more in official time duty status. It also outlaws recruitment, retention and relocation funding for the same employees.

Labor leaders believe that the bill unfairly targets the financial security of individual federal employees for their lawful service to their colleagues and their agencies.

See the full text of the letter below or download a copy here.

The undersigned unions of the Federal Workers Alliance (FWA), collectively representing more than 300,000 federal workers, urge you to VOTE NO on the Official Time Reform Act of 2017 (H.R. 1364).  This bill passed out of committee under false pretenses through a series of serious mischaracterizations about federal official time use, and what H.R. 1364 will prevent and provide.

In summary, this bill targets individual federal workers (and their families) who have done nothing more than perform the lawful duties of their jobs, under the supervision of agency management representatives.  The bill withholds service credit hours toward retirement from employees who work 80% or more in official time duty status. It also outlaws recruitment, retention and relocation funding for the same employees.

Most reprehensively, this bill retroactively denies employees their retirement service credit hours for time already worked if they retire on or after October 1, 2017.  This provision serves no purpose other than to force certain employees who perform representational work into retirement or risk losing months or years of retirement service credit hours for doing nothing other than their lawful duties.

We would like you to understand the facts about H.R. 1364 and official time:

Official time is not “union time.”  Activities such as political and internal union business are already prohibited (e.g. the Hatch Act affords no exceptions for unions).

Official time is a beneficial workforce practice.  H.R.1364 falsely depicts this longstanding, important workplace process as illegitimate.  The bill’s main goal is to target the financial security of individual federal employees for their lawful service to their colleagues and their agencies.

At a time when the checks and balances of the government are especially valuable and important tools, H.R. 1364 will discourage employees who wish to perform the important services  provided using official time, which has been shown to be of significant value to agencies and civil service employees and encourages transparency and accountability in government.

Thank you for your review of this issue and supporting this request.