“President Biden’s budget builds on his already historic progress and continues to put America’s working families first. His 19 percent increase in proposed funding for the Department of the Interior coupled with the already passed Infrastructure Law will create good-paying union jobs and make critical investments in climate resiliency, clean energy, and conservation.

“The budget lays a foundation for prosperity for generations to come.

“This budget includes $105-billion for the Department of Transportation to allow for maintenance and modernization of our nation’s most critical transportation assets. $3 billion for commercial-navigation projects—such as river locks and dams. We will see additional funding for our nation’s short sea shipping routes. Investment in domestic manufacturing, affordable housing, and supply chain modernization. The budget also addresses prescription drug prices, childcare, health care, and higher education.

“Increased defense spending including a four percent increase for the U.S. Navy and funding for modernization of all three legs of the nuclear triad, with $34.4 billion for the nuclear enterprise. That includes $6.3 billion for the Columbia-class submarine.

“With the release of this proposed FY23 budget, President Biden has once again shown his commitment to building back better an America for the people, of the people and by the people.

“We urge Congress to fund this budget and put America to work.” 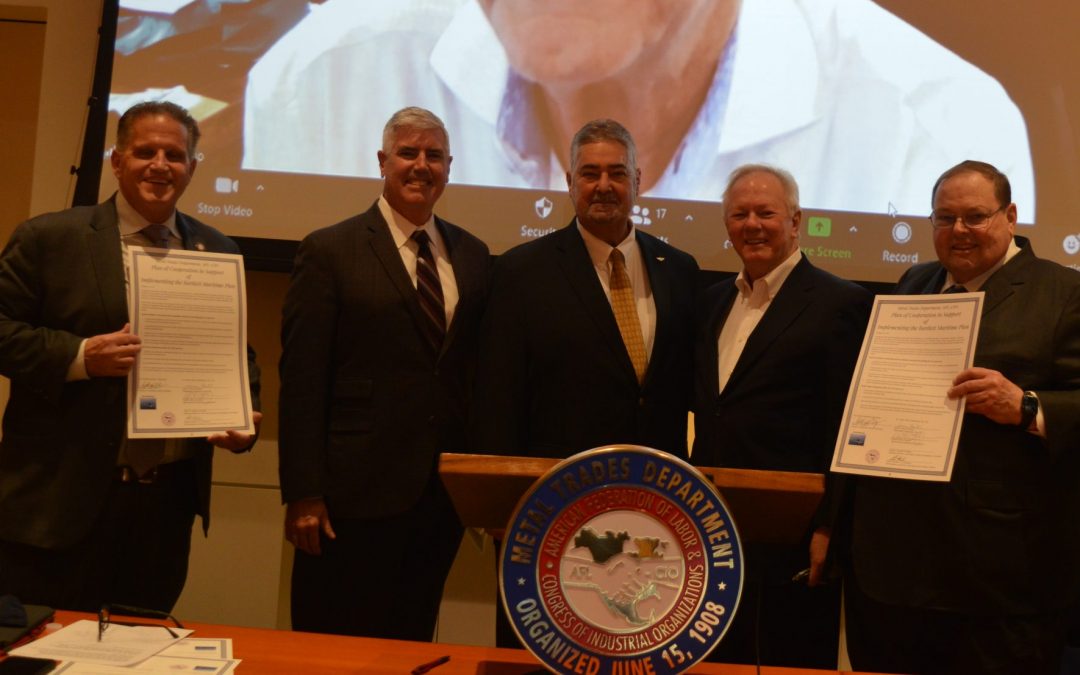 This historic labor-management partnership agreement lays the foundation for Bartlett Maritime Corporation and its subsidiary, American Naval Shipyard, LLC, to become the U.S. Navy’s newest, privately owned maintenance and repair shipyard. The Metal Trades Department’s partnership with Bartlett will provide the company with support to promote the Bartlett Maritime Plan™ and to ramp up hiring and training the new workforce at the company’s Ohio shipyard.

“The Metal Trades Department and its affiliated international unions are proud to join Bartlett Maritime in its efforts to become the next public-private U.S. Navy maintenance and repair shipyard,” said MTD President James Hart. “We look forward to this partnership and the impact it will have on creating and sustaining good, unionized jobs in Ohio.”

The Bartlett Maritime Plan™ is a public-private-partnership (P3) that will provide the U.S. Navy with new ship maintenance capacity and capability while accessing an entirely new labor pool to staff this new endeavor. Bartlett Maritime has two VPM-Virginia-capable drydocks in a fully enclosed drydock production facility and a new equipment depot to maintain and repair key ship components and equipment.

Bartlett’s plan, once implemented, will result in annual savings for the U.S. Navy of more than $100 million per year while creating more than 41,000 jobs.

“Bartlett Maritime is filling a void in Naval shipbuilding and repair,” said Hart. “The Bartlett plan is feasible, actionable, and affordable. It complements our existing Naval shipyards and nuclear build yards. The Metal Trades and its Executive Council intend to put its full and substantial support behind this plan.”

The Metal Trades Department (MTD) is a trade department of the AFL-CIO. It was chartered in 1908 to coordinate negotiating, organizing, and legislative efforts of affiliated metal working and related crafts and trade unions. Seventeen national and international unions are affiliated with the MTD today. More than 100,000 workers in private industry and federal establishments work under contracts negotiated by the more than 30 MTD Councils in North America. Under the umbrella of the Metal Trades, workers retain membership in their own trade union. 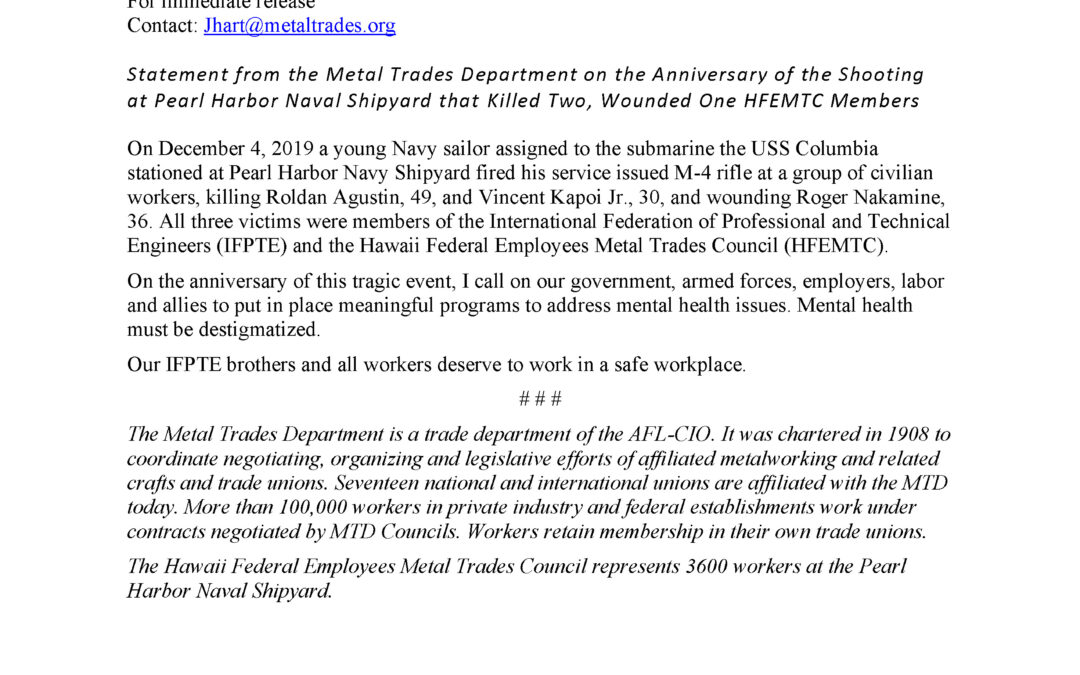 Statement from the Metal Trades Department on the Anniversary of the Shooting at Pearl Harbor Naval Shipyard that Killed Two, Wounded One HFEMTC Members

Statement from the Metal Trades Department on the Anniversary of the Shooting at Pearl Harbor Naval Shipyard that Killed Two, Wounded One HFEMTC Members

On December 4, 2019 a young Navy sailor assigned to the submarine the USS Columbia stationed at Pearl Harbor Navy Shipyard fired his service issued M-4 rifle at a group of civilian workers, killing Roldan Agustin, 49, and Vincent Kapoi Jr., 30, and wounding Roger Nakamine, 36. All three victims were members of the International Federation of Professional and Technical Engineers (IFPTE) and the Hawaii Federal Employees Metal Trades Council (HFEMTC).

On the anniversary of this tragic event, I call on our government, armed forces, employers, laborand allies to put in place meaningful programs to address mental health issues. Mental health must be de-stigmatized.

Our IFPTE brothers and all workers deserve to work in a safe workplace. 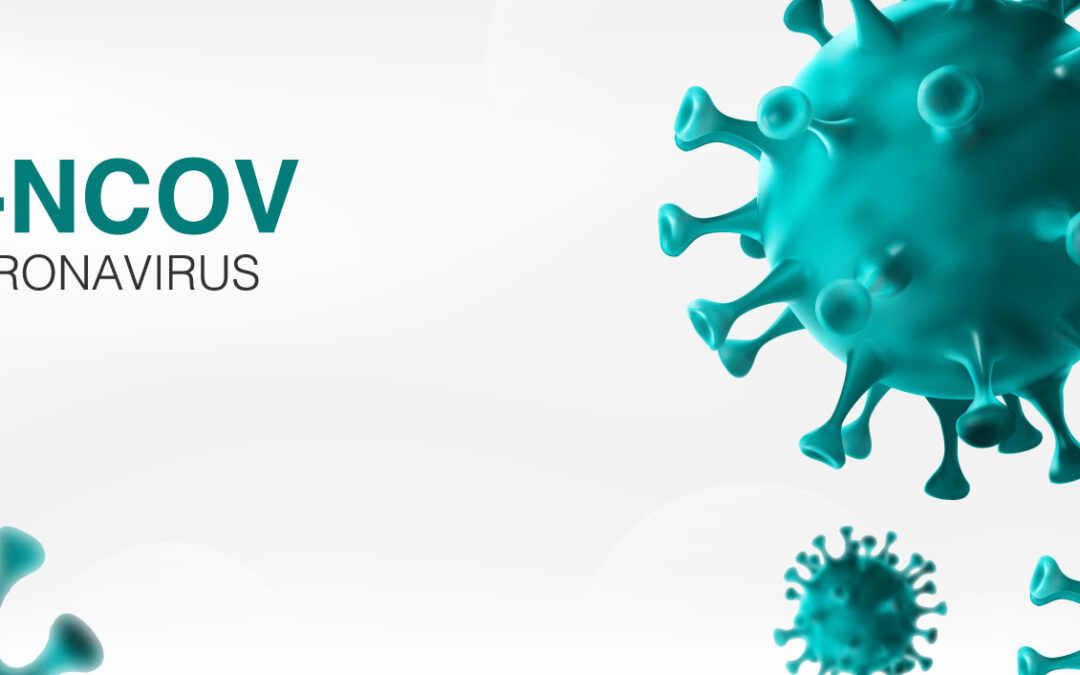 Washington, DC—The Metal Trades Department, AFL-CIO is urging the House, Senate and White House to pull together in developing policies that will help ensure that America’s hourly and salaried workers will not have to choose between their health and making ends meet.

About 78 percent of workers live paycheck-to-paycheck and nearly 80 million American workers are hourly employees who only get paid for the hours they work. As this virus spreads rapidly across the country, working families will suffer the consequences of inaction by our elected officials.

House Democrats released their coronavirus economic relief bill late Wednesday night, just as layoffs related to the Coronavirus outbreak were being reported. Their emergency economic plan is the first government response that actually addresses the needs of working families.

The Democratic bill includes coverage for coronavirus testing, paid sick leave, and expanded unemployment benefits for those laid off due to the virus’ effects on the economy. Additionally, the bill calls for expanding food assistance and state and local economic assistance.

The Metal Trades Department, AFL-CIO supports this plan as it seeks to provide assistance to those who will be most affected by this pandemic.