Convert your PDF to digital flipbook ↗

Prior to convening the Conference General Session, the Department held its 2nd Annual Charity Golf Tournament (see article for details) and several Caucus meetings including the Department Of Energy Caucus meeting to allow our council representatives to meet with our management partners to discuss worksite issues and brainstorm new ideas.

“The meetings were a great opportunity for our council representatives and our management counterparts to have informal discussions and get to know each other,” said MTD President Jimmy Hart.

The Conference General Session opened on Wednesday, October 11, with the singing of the National Anthem and the Canadian Anthem by the talented David Maxie, retired UA Local 525 Business Manager.

The theme of this year’s conference was “Metal Trades at 110… Proud History—Bright Future.” MTD distinguished Executive Council member and Operative Plasterers’ and Cement Masons’ International Association President Dan Stepano fired up the crowd with a rousing keynote speech to start the day.

Attendees also heard from Special Advisor to the Secretary of the Department of Energy Doug Matheney who President Hart describes as a “true workers’ advocate.”

Just before lunch, Congressman John Garamendi (D-CA), spoke passionately about his legislation, the “Energizing American Shipbuilding Act,” and how it would spur investment in domestic shipyards, create jobs, and enhance national security. Congressman Garamendi was joined by three other labor friendly political candidates from Nevada, Senator-Elect Jacky Rosen, Congresswoman-Elect Susie Lee and Congressman-Elect Steven Horsford. All three candidates won their respective races in the midterm elections. The candidates and Congressman Garamendi held a meet-and-greet for attendees to discuss their platforms and answer questions.

For the last several years, the Department has presented the “Chico McGill Person of the Year” award to recognize an individual for their work on behalf of working men and women. This year, the Department honored IAMAW Education Representative Henry Bagwell.

Henry was the former president for the Amarillo Metal Trades Council and currently works for the IAMAW as an instructor at the Winpisinger Center.

Throughout the Conference, the Department introduced statements of support for various causes. Those statements included a call to support the Union Veterans Council — urging every council to join or create a council; a statement of support for Federal Employees — especially in the face of continued attacks from the Trump administration; and a call for every council to lobby for and support the Jones Act.

To close out the day, the Department hosted a reception for all attendees, which included a performance by a Blue Brothers act.

On Thursday, the Conference General Session opened with remarks from the Boilermakers’ President Newton Jones, who shared with the audience the plight of a group of locked out workers in Three Forks, MT, at Imerys Talc. Audience members were so touched by these workers that they started a “pass-the-hat” collection to raise money to support the men and women who had been unjustly locked out.

Next, the Department hosted three important panel discussions on topics affecting the Metal Trades workforce. Labor and management representatives discussed Safety and Health issues; new market opportunities; and the incredible union benefits members receive and discussed how to use them as organizing tools.

“Our panel discussions were very well received this year. I had a lot of attendees comment on the discussions and tell me that they look forward to sharing the value of union member benefits with their members back home,” said Hart.

On October 8, the Metal Trades Department, AFL-CIO, once again kicked off its Annual Conference with its Charity Golf Tournament to benefit the Guide Dogs of America. Metal Trades Council members from around the country joined our corporate partners, union affiliates, and friends for a fun day at the beautiful Desert Pines Golf Club in Las Vegas.

Tournament participants were greeted by some of the Guide Dogs of America’s puppies in training and working Guide Dogs along the course.

The Guide Dogs of America is a non-profit organization that empowers people who are blind and visually impaired to live with increased independence, confidence and mobility by providing expertly matched guide dog partners. Their services are provided free of charge and available to people within the U.S. and Canada.

Thank you to all of our participants and sponsors for helping the Department put on such a successful charity event, we couldn’t have done it without you.

Ben hails from Portland, Oregon, and is a second generation Boilermaker.

Our thoughts and prayers go out to their families and friends.

Vincent J. Giblin, who retired from a long career with IUOE as general president, passed away Monday, October 15, 2018.

Born in East Orange, N.J., to John and Theresa Giblin, Vincent began his career with the International Union of Operating Engineers as a stationary engineer in 1964 for Local 68 in New Jersey. He was elected business manager for Local 68 in 1975 and held that position until 2004. He was elected to serve as an international vice president in 1989, a position he held until his election as general secretary-treasurer. He served as president of the Northeast States Conference of Operating Engineers and chaired the IUOE Stationary Committee. Vincent went on to be the general president of the IUOE in 2005, a position he held until his retirement in 2012.

Outside of the IUOE, he served as chairman of the Casino Reinvestment Development Authority and chairman and board member of Horizon Blue Cross Blue Shield of New Jersey.

Joseph J. Nigro Sr. passed away in Florida on Wednesday, October 24, 2018, at age 68. A Quincy, MA, native, he had lived in Pembroke, and Washington, DC, before retiring to Beverly Hills, Fla.

Joe retired as general president of the International Association of Sheet Metal, Air, Rail and Transportation Workers (SMART) in 2015.

Always a persistent advocate for the Union’s membership throughout his long and successful career in the labor movement, he started out as an apprentice in the Sheet Metal Workers Local 17, Boston, in 1969 and worked up through the union ranks serving as trustee, vice president, president, business agent, and business manager in Local 17 until 1999. Moving to Washington, DC, he served as assistant to the general president at the Sheet Metal Workers International Association until 2006, general secretary treasurer until 2011 and as general president.

After serving on the Finance, Organizing, Industrial Union Council, Pharmaceutical Benefits Management and Article XX Appeals committees of the AFL-CIO Executive Council, Joe and Mike Futhey, former president of the United Transportation Union, formed a historic merger between the United Transportation Union and the Sheet Metal Workers’ International Association into SMART in 2011.

In a letter to the locals and membership upon his retirement, he stated, “I have committed my heart and mind to accomplishing the goals we have set, but my health has taken me in a direction I did not anticipate. Unfortunately, I have been unable to recover to a level I expect of myself as your General President—the level of effort the members deserve.” A fitting response from Joe, who always gave the membership 100% of what he believed they deserved.

Joe’s outward facing personality complemented a humble, self-deprecating nature that led him to focus on “leading from the front”, which meant sharing the same burdens as everyone else. The beloved husband of Patricia E. (Vecchione) Nigro, Joe was the loving father of Tina Marie E. (Nigro) Lowe and her husband Todd C. Lowe of Indian Trail, N.C., and the late Joseph J. Nigro Jr.; dear grandfather of Devin J. Mulkeen of Indian Trail, N.C.; beloved brother John Nigro of Quincy, Marsha Golden of Quincy, Robert Nigro of Weymouth and Deborah A. Anderson of Braintree and the late Jeanne Marie Keefe and Barbara Gorman; and is also survived by many nieces and nephews.

He will always be remembered as the “Members General President,” A title he richly deserved and cherished. 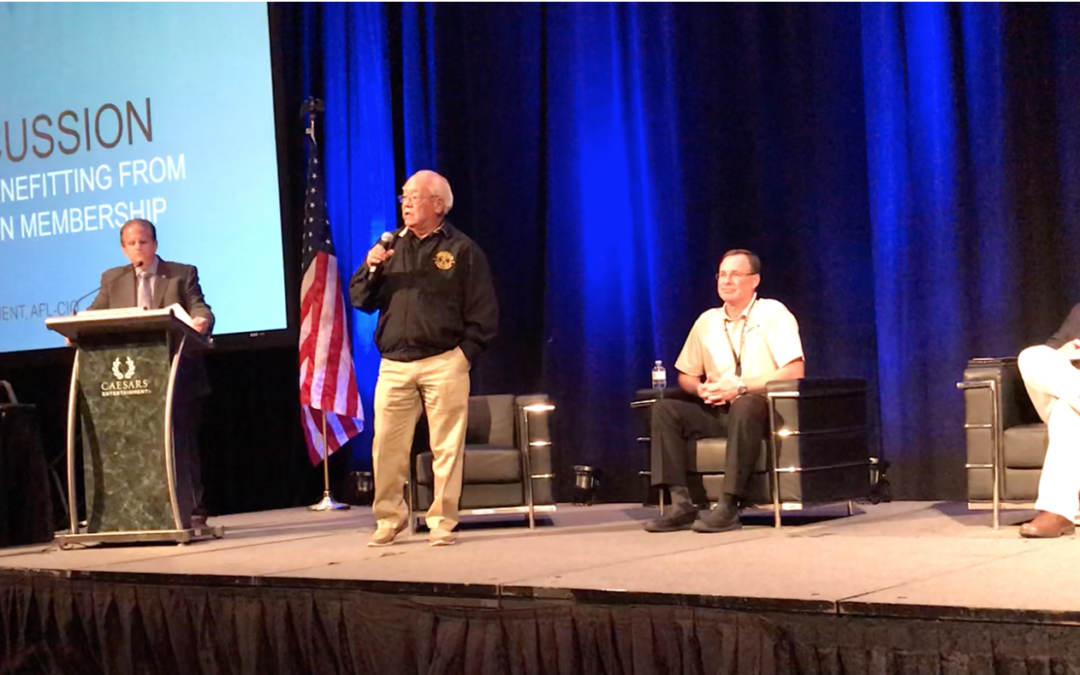 The Value of Union Membership 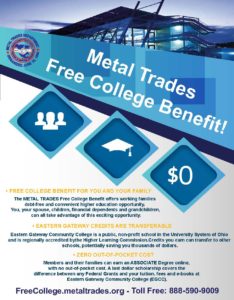 Union membership has its privileges.

During our recent Conference, attendees heard about some of the best perks of union membership from vendors and exhibitors. One of the newest offerings is the Free College benefit for union members and their families.

This last dollar scholarship program offers union members and their family the opportunity to earn their Associate’s degree from the fully accredited Eastern Gateway Community College.

Eastern Gateway Community College is a public, non-profit school in the University System of Ohio and is regionally accredited by the Higher Learning Commission. Credits you earn can transfer to other schools. 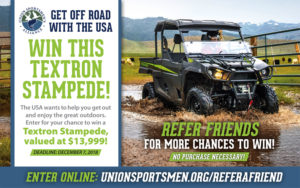 Attendees also heard from the Union Sportsmen’s Alliance (USA). USA is a union-affiliated conservation and outdoor recreation group. The USA brings together union members who enjoy hunting, fishing and other outdoor activities to unite the union community through conservation to preserve North America’s outdoor heritage.

Members of the Union Sportsmen’s Alliance receive discounts on gear, trips and lodging from participating partners and can win prizes or even appear of TV.

To find out more about the USA or to become a member, visit their website at: unionsportsmen.org.

USA offers free memberships to veterans and is running a “refer a friend” contest through early December.

Union Plus representatives were also on hand at the Annual Conference last month to talk about the multitude of other benefits union members receive. Union Plus offers mortgages, credit cards, insurance, and discounts on everything from cell phone bills to theme park admissions. Check their website www.unionplus.org for details.

A MESSAGE FROM PRESIDENT HART

The midterm elections are over.

No more robo calls, no more appeals to “Go Vote!” No more social media photos of wristbands and stickers proving “I VOTED!”
It’s over!

There are winners and losers and depending upon who you cast your vote for, you may feel like one or the other.

Elections are contests over the most important questions. Many metal trades workers are appreciative of the President’s economic and national defense agenda, many others are disturbed by the tone and direction of our country under the current occupant at 1600 Pennsylvania Avenue. In fact, the first two years of President Trump’s presidency was truly a stress test on democracy.

Election day and early voting turnout was amazing and union workers were clearly energized. Some knocked on doors, others manned phone banks, more importantly, we voted in big numbers!

It’s time for all Americans to join together and do what’s best for working families.

Thank you for your continued friendship and support.