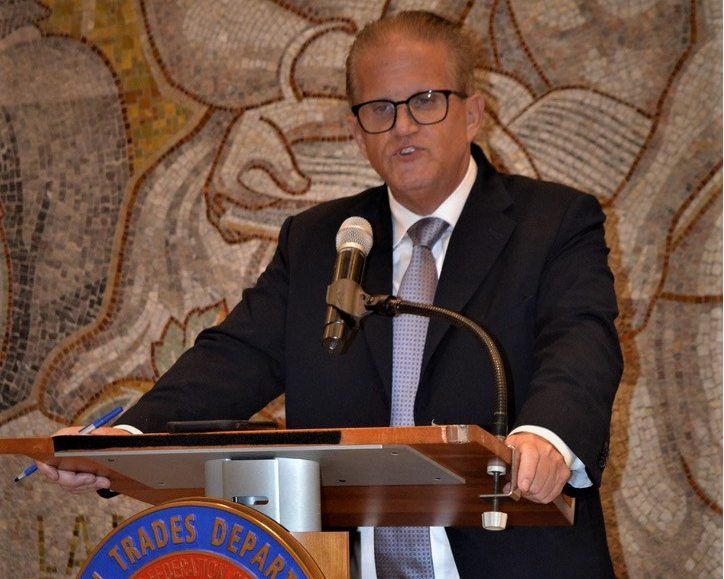 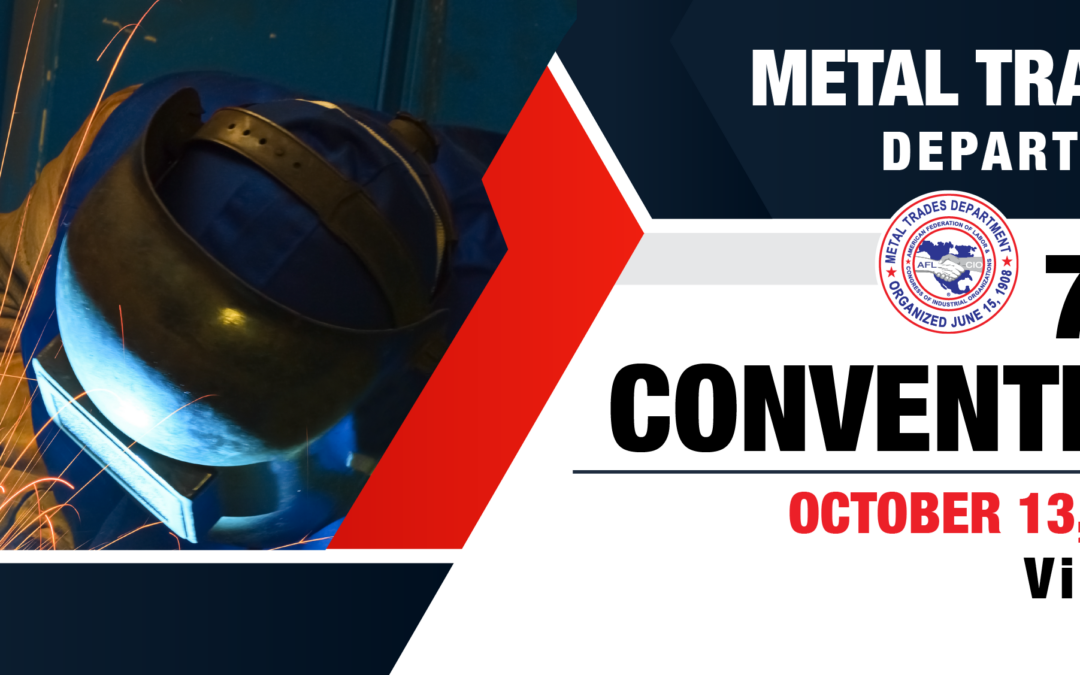 To: All Affiliated International Unions

Pursuant to Article III, Section 2, of the Constitution of the Metal Trades Department, AFL-CIO, you are hereby notified that the 71st Convention of the Metal Trades Department, AFL-CIO, will be held virtually beginning at 9 a.m. EST Wednesday, October 13, 2021 and will continue in session from day to day until the business of the convention has been completed.

We call your attention to the applicable provisions of Article III of the Department’s Constitution:

Section 1. The Convention shall be the supreme governing body of the Department and its powers while in Convention session shall be legislative, executive, and judicial.

Section 2. Regular Conventions of this Department shall be held every five years with the election of officers of the Department taking place every regular convention. Special Conventions may be called by the President should a majority of the affiliated National or International Organizations so request.

Section 5. Delegates to the Convention shall be properly selected at least thirty (30) days previous to a regular Convention in accordance with the Constitution and By-Laws of the affiliated National or International Unions and local and district Metal Trades Councils. The names of such delegates shall be forwarded to the President of the Department after their selection.

Section 6. No organization that has seceded, or been expelled or suspended by this Department, the American Federation of Labor and Congress

of Industrial Organizations or by a National or International Organization connected therewith shall, while under such penalty, be allowed representation or recognition in this organization, or in any local Metal Trades Council under penalty of suspension of the body violating this section.

Section 8. Delegates shall not be entitled to a seat in the Conventions of this Department unless the tax of their organizations has been paid in full thirty (30) days preceding the Convention.

Section 9. The following committees at Convention shall be appointed by the President:

And such additional committees as may be deemed advisable by the President.

Section 10. The President shall direct the chief executive officers of three (3) National or International Unions, at least ten (10) days previous to the holding of the regular Convention, to appoint one delegate each from their respective delegations-elect, who shall compose the Auditing Committee, and also the Committee on Credentials. This Committee shall meet at such place and such time as the President of the Department may determine is necessary for the proper performance of its duty; and it shall audit the accounts of the Department for the preceding sixty (60) months, and report upon credentials immediately upon the opening of the Convention. And each member of the committee shall receive the sum of seventy-five dollars ($75) for his services.

Section 11. Resolutions of any character, or propositions for changes in this Constitution cannot be introduced in the Convention after the first day’s session, except by unanimous consent. Resolutions can only be introduced by a regularly accredited delegate from an affiliated National or International Organization, or from a regular chartered Metal Trades Council.

Section 12. The Convention shall have power to order an executive session at any time.

Section 13. None, other than delegates, shall be permitted to address the Convention or read papers therein, except by a two-thirds vote of the Convention; except the authorized invited Convention speakers.

Section 14. The Rules and Order of Business governing the preceding Convention shall be in force from the opening of any Convention of this Department until new rules have been adopted.

Section 15. A quorum for the transaction of business shall consist of not less than, a majority of the delegates attending a Convention

Section 16. No grievance shall be considered, by any Convention that has been decided by a previous Convention, except upon the recommendation of the Executive Council, nor shall any grievance be considered where the parties thereto have not previously held a conference and attempted to adjust the same themselves.

Section 17. Questions may be decided by a division or show of hands; but if a call of the roll is demanded, each delegate shall cast the vote as provided for in Article III, section 4 of the Constitution. When the full number of delegates from any affiliated organization is not present, the number of votes to which such organization is entitled may be cast by its delegate.

Please return a formal letter or email with the name(s) of your delegate(s) elect addressed to the Metal Trades Department Operations Director, Lisa Johnson at ljohnson@metaltrades.org by no later than COB, Monday, September 13, 2021.

The Resolutions Committee shall meet one day before the convening of the Convention for the consideration of resolutions on matters referred to that committee.

If you have any questions or need any additional assistance, please contact MTD Operations Director, Lisa Johnson at (202) 508-3705.

Registration Open for 71st Convention of the Metal Trades Department

Virtual Conference to Be Held Oct. 13

Registration is now open for delegates and guests for the 71st Convention of the Metal Trades Department, AFL-CIO. The Convention will be held on October 13, 2021, virtually.

The department is working with an outside vendor to plan and execute the Convention, which was forced to move to an online platform due to uncertainty surrounding COVID-19 restrictions.

The MTD Executive Council voted unanimously to hold the Convention virtually. While it appears the country is beginning to open up, the planning time needed to put together an event of this scope, the international travel restrictions for our Canadian delegates, and the uncertainty surrounding state and local restrictions come October, the Executive Council made the difficult decision to hold the Convention online.

“While ideally, we would like to hold the Convention in person, we just felt that it was in the best interest of our members and guests that we adapt our meeting to an online platform,” explained President Hart. “We look forward to returning to an in-person Conference in 2022.”

Details and registration information for the Convention can be found here.