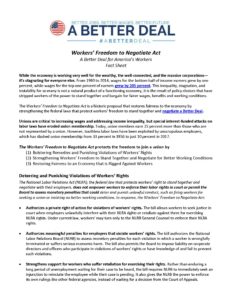 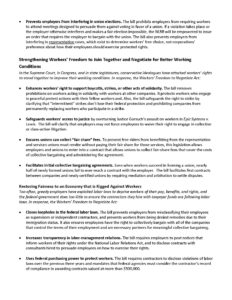 On Wednesday, Senate and House Democrats introduced legislation that would give all Americans a seat at the table and build an economy that works for everyone, not just those at the top. The Metal Trades Department, AFL-CIO strongly supports this legislation.

See the text of the joint press release below for more information about this important legislation.

As The GOP Continues To Protect The Wealth of Special Interests And Big Corporations Instead Of Protecting The Rights And Well-Being Of American Workers, Democrats Introduce New Legislation That Would Give All Americans A Seat At The Table And Build An Economy That Works For Everyone–Not Just Those At The Top

Dems: America Was Built To Be The Land Of Opportunity—To Protect Opportunity For All, Must Strengthen American Workers’ Bargaining Power, and Safeguard Workers’ Rights To Organize

Giving workers the freedom to negotiate A Better Deal would:

“The Golden Era in America was defined by the existence of unions; families had opportunities, people bought homes, had cars, went on vacations. Since then, unions have been under relentless attack by big corporate special interests backed by Congressional Republicans,” said Senate Democratic Leader Chuck Schumer. “If Mr. Trump truly wants to make America great again, he needs to start by protecting the American worker and disassembling the rigged system that undermines workers’ freedoms instead of empowering special interests and big corporations.”

“The hard-working men and women of labor are the backbone of our economy and the foundation of our strength,” said House Democratic Leader Nancy Pelosi.  “Generations of American workers paved the way to higher wages, better health care, safer working conditions and stronger retirement security for everyone.  Yet, Republicans are doubling down on their anti-worker, special interest agenda by rolling back decades of progress and shamelessly undermining workers’ fundamental rights.  I am proud to join my fellow Democrats to tilt the playing field back to the side of the American people and offer A Better Deal that protects the right to stand together in union and strengthens protections for American workers.”

“After decades of corporate special interest attacks on workers and unions, too many families today are struggling to make ends meet and feel financially secure,” said Senate HELP Committee Ranking Member, Senator Patty Murray. “I’m proud to join my colleagues to introduce legislation that will strengthen workers’ bargaining power and their right to join a union to advocate for safer working conditions, better pay, and a secure retirement—and I urge my Republican colleagues to join us in working to build an economy that works for all—not just those at the top.”

“The Workers’ Freedom to Negotiate Act is a comprehensive response to decades of attacks on workers’ rights,” said House Education and Workforce Committee Ranking Member, Bobby Scott. “Workers must be empowered to negotiate for fair wages and decent benefits, so they can provide for their families, access affordable health care, and retire with dignity. This legislation takes necessary steps to improve the quality of life for workers and their families, and recognizes that empowering workers’ right to negotiate is critical to unrigging the economy.”

“Our economy is rigged against working people. The Republicans who control Congress are bought and paid for by corporate special interests,” said House Democratic Policy & Communications Committee Co-Chair Congressman David Cicilline.  “Democrats have A Better Deal that puts working people first so everyone has a chance at the American Dream, not just the wealthy.”